As we walked up to the the booth to see all the new XOP products for 2023, we were a little overwhelmed.  In total we found ten items that were noteworthy, but that was only a portion of the new stuff.  There were three new stands, a new platform, three different climbing stick designs, and three other miscellaneous items we thought were “neat.”

Each of the treestands and platforms had a very utilitarian feel to them.  The newer stuff on display had a noticeable color difference from the non-slip texture on the stepping surfaces.  While not as visually striking as say a LWCG stand, they still seemed functional and exceptionally light from the claimed weights.

On display they had a larger hang-on treestand named the “Cold World”.  At roughly 7.5 pounds this would put the stand on par with many of the lightest weight stands available.  Especially for a platform that size.  At an estimated $450 it wasn’t cheap, but also wasn’t expensive by comparison with other stands.  Should be available sometime in April/May of this year.

The other named stand was the Retrograde Hang-on.  This one was lighter at roughly 6 pounds, albeit smaller. It also is supposed to be a little cheaper at $400, but may not available until May/June.  Still plenty before hunting season, however.

XOP also showcased a prototype climber that looked very similar to the one LWCG announced this week.  While we couldn’t get any specs or anticipated price, I’d expect it’d follow in a similar fashion to the other stands in relation to other “similar” brands.

Lastly, for us saddle hunters they also released the Invader platform.  At 2.5 pounds and estimated price of $200, the specs on this are better than many of the higher-end, more expensive options out there. Especially since we were told that this and the other stand have a 350 pound weight rating.

To go along with the numerous new stands were a similar range of steps. The had on display their longer X3 steps, X2 steps, as well as their Reactor steps.  Each step weighed substantially less than the other as we went through the display, with the X3, X2, and Reactor weighing 3.1, 1.5, and 1.2 pounds, respectively.  The Reactor used a hollow aluminum tube for the vertical support to achieve this light weight.  The Reactor had somewhat of a small flat for both the top and bottom step to allow it to double as a platform if you are trying to go ultra lightweight. This step/platform combo came with their new C3 micro-buckle – an extremely lightweight aluminum cam-buckle with a Dyneema strap.

Now when it came to cost, things got a little more hairy.  As expected, the X3s were more expensive at $220 for a four-pack versus the X2s at $180 per four.  Still reasonable in our book.  However, the Reactor were an astonishing $130 each. Sold singly, they were marketed more towards using as a top step and platform combo.  Because of this you’d be best to pair this with one of their other steps.

There were more new XOP products this year than we could adequately cover.   One of the honorable mentions was their Mondo harness – and upgraded version of their Renegade harness which should retail around $150.

While potentially a prior year’s release, they also showcased their Seti bowholder – a simple but cost-effective item for only $20. They also had a new “Meleagirs” Turkey Vest that looked promising for $69.99.

For more information on other XOP products please check out their website at xopoutdoors.com.  Please note that many of these items aren’t currently on their website, but we’d anticipate they will be listed around the availability timelines we mentioned above.

Calvin grew up in southern Indiana, but now spends most of his time in the beautiful Shenandoah Valley. Although he works full time at a pharmaceutical facility, he still finds time to do things he loves; traveling with his wife Jamie, spoiling his daughters Arrow and Amelia, playing with his dogs, and enjoying the outdoors.
All Posts 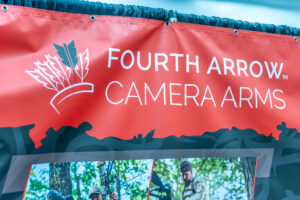 While not released in 2023, one of the newest attractions at the Fourth Arrow booth was their SaddleLite camera arm.  This camera arm was able to take 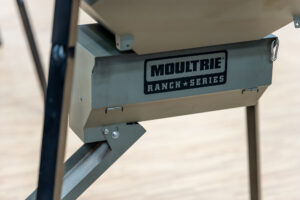 For 2023 Moultrie’s new Ranch-Series expanded their already massively successful line of feeders with six new configurations.  These all-metal, rock-solid feeders are meant to be 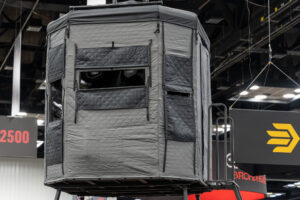 Greylight was a new name on the ATA floor for 2023 with some familiar faces.  The folks at Xenek have rebranded the company while also releasing two