The all new Final Rest by Fourth Arrow is a highly configurable shooting rest system designed to meet the needs of a wide variety of hunters. From the most seasoned shooters all the way down to the novice, the benefits of this platform are numerous. In the case of my 9 year old daughter, the Final Rest is a game changer and something I can’t imagine hunting without.

Going into the 2019 deer season, Morgan and I decided it was time to make a serious effort to get her on her first deer. She is a good shot by all accounts, and she knows where to put her bullet/crossbow bolt when the time comes, but the execution of that shot can be tricky without a solid rest. The problem is most of our stands are hang-ons, and the idea of Morgan free-handing any weapon is out of the question. As we began evaluating different shooting rests, I feared we might not find a viable option for her until I saw the Final Rest.

What makes the final rest so appealing is its ability to adapt to almost any situation. The system is comprised of a few components: the shooting rest, an arm (not required), and a base. The shooting rest is the same in all configurations and features both tilt and pan capabilities with a t-handle that is able to lock the tilt. The arm comes in both a single and triple configuration and can be used interchangeably. For the base, Final Rest users can choose from the Final Rest Pillar, a Tripod (Final Rest or your Own), Fixed Blind Down Post Base, or even a Fourth Arrow Camera Shoulder should they already have one.

The configuration my daughter has used the times she has hunted so far have been the Fixed Blind Down Post Base and the Final Rest Pillar, both with the Triple Arm, so those are the setups I will speak to our experience with. 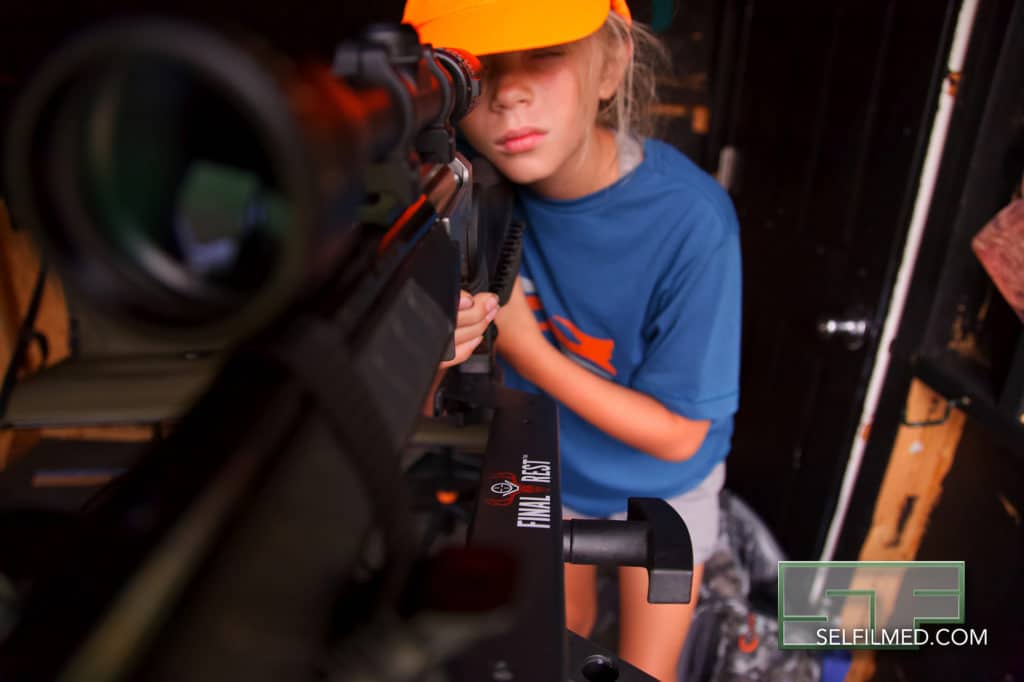 The Final Rest Pillar is a really well thought out system, and accommodates both the Single and Triple Arm. If you are unable to use a Fixed Blind Down Post Base, this is definitely the route I would go. For starters, by using the Pillar (or a Fixed Base), you remove the need to have a tripod or other support structure that will take up your valuable floor space. Especially with kids, the less gear you have in the way, the less likely they are to make unwanted noise when the moment of truth arrives.

Setup is simple with the pillar, especially when you use the Pillar Mounting Bar. The Pillar Mounting Bar provides a solid connection point in any fixed blind and can be purchased individually for use in multiple blinds. Alternatively, the Pillar can be clamped onto any shelf or solid structure that is less than 1” in thickness. The Pillar mounting bracket also has the ability to rotate almost 360 degrees so that it can be fixed to any solid object regardless of the angle. Once the bracket has been secured, the leg of the Pillar can be extended to the appropriate height adding additional support from the floor of the blind.

The Fixed Blind Down Post Base is simply screwed to any solid surface creating a solid attachment point for the Single or Triple Arm. It is important with the Fixed Blind Down Post Base to ensure it is level, so you may be required to shim the base. There is a bubble level on top of the base to help make this process more simple, but the fixed base is less functional if it is not at least close to level.

The advantage of the Fixed Blind Down Post Base is that they can be purchased individually like the Pillar Mounting Bar, or in a pack of 4 and can be installed in all of your blinds; requiring no additional setup for use. Just place your arm into the pre-installed base and you are ready to go. In the event you have multiple windows in a blind, it is an easy task to move your Fourth Arrow Final Rest from window to window with very little effort or noise. The ability to only carry your Shooting Rest and Arm from blind to blind makes this option the most mobile friendly.

As I mentioned above, I only have hands on experience with the Triple Arm, but after using it, the Triple Arm is for sure the option I would pick. My only hesitation up front was whether or not the multiple joints would be capable of sustaining the weight of a rifle while still providing a solid rest. The short answer, absolutely! The Triple Arm was solid. I liked the ability to adjust the arm around so it could be longer or shorter depending on the situation. Considering the stability of the Triple Arm, I feel it has a lot of upside, although the Single Arm could certainly be useful if you have a heavier rifle or crossbow.

What I like most about Fourth Arrow products is the flexibility and configurability. I intend to hunt with Morgan in a blind as often as possible, but I can almost guarantee we will end up in a tree stand at some point. When this happens, the ability to use a Fourth Arrow Shoulder will be critical and allow us to realize the full potential of the Final Rest. Without this option, our mobility would be limited and reduce the locations where Morgan would be able to hunt.

Speaking of mobility, another huge benefit of Fourth Arrow products are their packability. The shooting rest has collapsible yokes which reduce its overall size when transporting it to and from your hunting location.

The Final Rest is without a doubt one of, if not the finest shooting rest systems ever to be brought to market. As an aid to a youth hunter, it’s value is unquestioned. I believe this system is designed well enough that it can also provide a huge benefit to more seasoned hunters as well. Regardless of whether you need a little extra stability to make a long shot, or you simply need a rest to hold your rifle or crossbow while waiting on the deer of a lifetime, the Final Rest has you covered.

For more information on the Final Rest and other Fourth Arrow products, be sure to visit their website at fourtharrowcameraarms.com/final-rest.

As any backcountry hunter (or hiker) is aware, you pay more for less when it comes to ultra lightweight backcountry gear. Shaving even an ounce

A Review of the Benchmade 15500 Meatcrafter Knife

I finally got my hands on the elusive Meatcrafter knife. I have been using Benchmade knives for several years – started with the Hidden Canyon

SELFILMED is giving away a brand new DSD Breeding Pair with the white face paint scheme to one lucky person! Approximate retail value of the