I have been working on completing my NWTF Slam with a bow for several years now, and I’ve been fortunate enough to take quite a few Eastern Turkeys, as well as four Merriam’s. So when my wife asked me if I’d like to go to Texas this spring to visit Waco and see all the Fixer Upper hot spots, I said “sure…but, I have one condition!” Any guesses on what my one condition was?

A few months later, we were flying into DFW headed to meet up with Jose Aponte (Ranch Manager) at the Flying 5B Ranch in Iredell, Texas. I had talked to Jose several times in the weeks leading up to my hunt and I felt like we had a pretty solid game plan to get on some birds. Jose had already set up my Xenek Blind morning between a primary roost site and a lake which the birds visit frequently. Given the amount of knowledge Jose had about the travel patterns of the turkeys on the ranch, I figured I was in good shape.

The forecast for March 30 called for high winds. However, I distinctly remember thinking to myself the weather forecasters were equally as bad in Texas as they were back home in Ohio. There was barely a breeze! I quickly set up my DSDs and camera gear, and sat back waiting for what I now expected to be a slam dunk hunt. The birds were gobbling like mad on the roost, and several weren’t too far away. My excitement level was on the rise, but before it got to high, the wind that was expected showed up and crashed my party, almost literally! A burst of wind slammed into my blind, causing one of the hubs to collapse. What the heck! As if someone had flipped a switch, the calm morning vanished, and so did the sound of gobbling turkeys.

A Change in Scenery

After a few hours of nothing but watching the trees whip back and forth, I got a text from Jose asking if it’d be ok for him to drive down the gravel road just North of my set up. I didn’t mind. In fact, I welcomed the opportunity as I  was ready for a change of scenery. I was in a good area, but I needed to get out of the wind if I wanted any chance at success. When Jose arrived on scene, I recapped the morning events and explained that the birds I heard gobbling were all to the North. Jose recommended we head that way, he knew of a good spot a little more sheltered from the wind. The only downside, I was going to have to be a little more mobile with my setup. As a result, we elected to leave the blind behind.

Turkey on the Run

As we pulled up along side the fence on the North West part of the Ranch, I caught sight of a gobbler running away on the neighboring property. I was initially flustered, but Jose assured me these birds were used to seeing vehicles move about the Ranch. We decided it made sense to setup close by in hopes the bird wouldn’t go far. The best option for a natural blind was a dense cedar that provided a good view of the area I wanted to set up my decoys. I broke off a few interior branches hoping to create a little more clearance for my bow and stacked them to better conceal my hiding place. I expected to do all of my hunting from within a blind, and lacking camo, I would need to be extremely careful to avoid getting busted.

I began setting up, thinking it would be best to let the area settle before calling. GOBBLE! The sound caught me totally off guard. The old Tom had not gone far. I waited a moment and then let out a series of yelps. Within seconds, he gobbled back. Every ounce of me wanted to keep calling, but I knew patience was the best plan of attack. He had clearly answered my calls, and I’ve ruined opportunities in the past from overcalling. Over the next few minutes, I listened as the bird gobbled several more times. No far to my right, I heard the sound of his wings beating against the air. Unless I was mistaken, he had just flown the fence. I got confirmation moments later as a gobble broke the silence just 50 yards behind me. He was definitely on my side now!

As the bird drew nearer, I was suddenly aware of how exposed I was, and I began to grow nervous he would see me if his approach brought him too near to my blind. My fears suddenly became more real when the bird began drumming 20 feet away! I froze…afraid to even blink. The tom methodically strutted back and forth for what seemed like an eternity, and at one point, he got so close to me that I could hear his wings dragging through the grass. I was shocked when I finally caught sight of the strutting tom walking towards my decoys 15 feet away.

As he approached my DSDs in full strut , his fan completely hid me from his view. I glanced up quickly at the LCD on my camera to make sure he was in frame and hurriedly drew my bow. My heart skipped a beat when the side bar on my bow hit one of the tripod legs. Again, the wind had likely saved me and the bird was none the wiser to my presence. I anchored my bow and the bird turned broadside. I settled my pin just above the copper band on his near wing and let my arrow fly. THUD! The bird instantly collapsed to the ground, flapping violently trying to escape, but he wasn’t going anywhere. Not willing to take any chances, I threw my bow to the ground and pitched myself out of the blind to give chase. 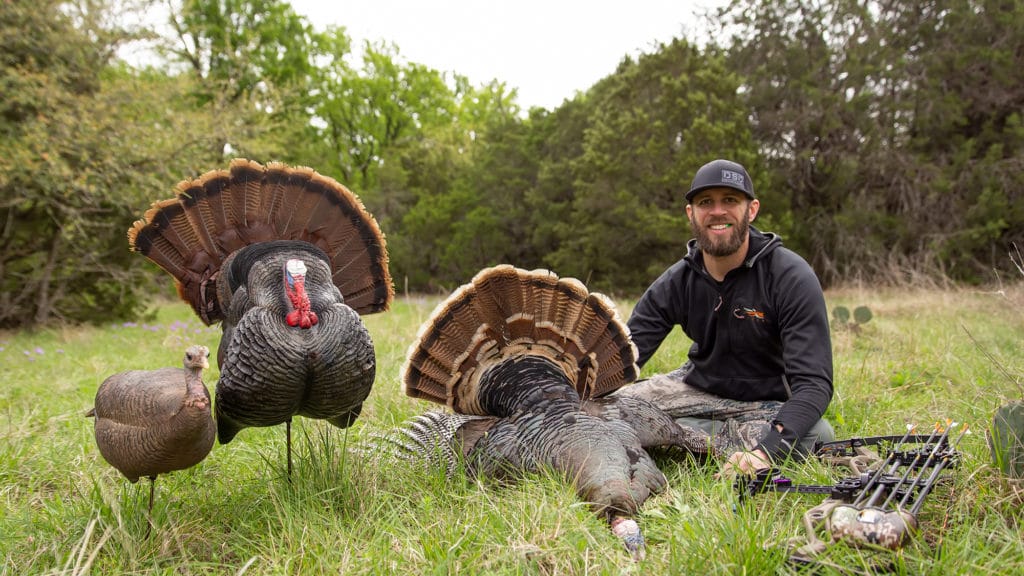 The first thing I noticed when I got to my bird was that he was no youngster. He had some hooks! His spurs measured a solid 1 1/2 and 1 9/16 inches, not bad for my first Rio. He also had a 8 1/4″ beard and weighed just under 21 pounds. For a day that started out pretty hopeless, things sure turned around in a hurry. There are definitely occasions where it pays to wait em’ out, but occasionally you’ve got to make something happen. On this occasion, getting aggressive worked to my advantage, netting me one of my best turkeys to date. This was also my first bow bird outside of a ground blind. Best of all, with Kentucky, Ohio, and Indiana seasons right around the corner, I’ve got plenty of hunting left.

As any backcountry hunter (or hiker) is aware, you pay more for less when it comes to ultra lightweight backcountry gear. Shaving even an ounce

A Review of the Benchmade 15500 Meatcrafter Knife

I finally got my hands on the elusive Meatcrafter knife. I have been using Benchmade knives for several years – started with the Hidden Canyon

SELFILMED is giving away a brand new DSD Breeding Pair with the white face paint scheme to one lucky person! Approximate retail value of the