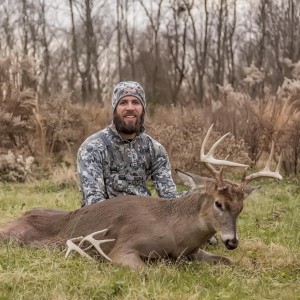 I will be the first one to admit I am a gadget guy, and by that admission, I must also admit I am always over eager to try out the new “gimmick” products. Granted, a lot of them turn out to be just that, a gimmick. But every once in a blue moon, there is a product that comes along that is truly revolutionary. The HECS Stealthscreen lineup of clothing fits that mold perfectly. Revolutionary gear that once you own, you will refuse to enter the woods without it.

So what exactly is the HECS Suit? Well, before I answer that question, let me ask you another. Have you ever had that perfect treestand location, nestled into a cedar tree, a stand you only hunt on a certain wind direction, a stand that sits on the side of a cliff where zero deer could ever get down wind of you? Yet somehow, when that first doe walks out in the field, she immediately starts acting nervous, alert, it’s like she knows you’re there? Have you ever experienced a deer with that “6th” sense? I think it’s safe to say that most of us have, but what exactly is it? And how can we beat it.

It has been scientifically proven that all living creatures emit an electrical energy signal. It is also widely accepted that all living creatures can sense those electrical energy signals. Even humans can to an extent, but unlike wild game animals, our senses are not as keen, or at least not as honed due to a lack of necessity.  Studies conducted by HECS show, with certainty, that electrical energy detection is the infamous “6th sense”. Suddenly, top of the line camo and meticulous scent control are no longer enough. As if a deer’s eyesight and nose weren’t hard enough to fool, we now have to worry about something innate within each of us that cannot be controlled? Enter HECS.

I said above that the HECS Suit was a revolutionary product and it has changed the way I hunt, but the question still exists, what exactly is the HECS Suit and how does it change the way I hunt? The answer lies within the name HECS itself, Human Energy Concealment System. Simply put, the HECS Suit is designed for one purpose, and one purpose only, to conceal the electrical energy signal your body emits. HECS achieves this by utilizing a well-known and commonly used principle known as the Faraday Cage. This technology was invented in 1836 by a scientist named Michael Faraday and has since been used throughout numerous industries to successfully block electromagnetic signals from being transmitted from one subject to another. In our case, from us as hunters to whatever game we are pursuing. To read more about the technology used to develop HECS, click here.

Earlier this year, I wrote an initial review of the all new for 2015 HECS Suit, which you can find here.  My previous article outlined some of the new features available on the 2015 HECS Suit, but even more important than the quality of build the suit provides, is its ability to perform in the field. Now, if you are sitting there reading this thinking there is no way this works as advertised, you are not the first, and you won’t be the last. But what I can tell you is this, if you give the HECS Suit a try, you will eventually have one of those, as Ozonics has called it, “Ah-Ha” type moments.

For me, it came at the most unlikely time. I was hunting in 2013 and I had just climbed into the stand. It was only 2:30 in the afternoon on an early October hunt and I was not expecting any movement until close to dark. I went through my usual routine of pulling my bow up in the tree, setting up my camera, and getting everything organized for the afternoon. What was not normal, was the fact that when I turned around there was a doe feeding a mere 20 yards away. Now at first, I was shocked that she had not seen me. I like to think I was pretty quiet while setting up, but I certainly made enough movement to scare away any deer within sight. To my amazement, she continued feeding on as if she didn’t have a care in the world. This alone should have been enough to sell me on my HECS suit, but it gets better. As I grabbed my bow and positioned my camera for a shot, still a little unsettled and feeling as if I had to hurry or else this deer was going to do exactly what I thought she should have done already and bolt for the woods, I rushed my shot and bounced my arrow right off the top of her back. ASTONISHINGLY she jumped a few feet and turned around to begin scanning the tree line where I was sitting. I know her eyes passed over me several times as she searched for whatever had startled her, but after a moment of looking…she went back to feeding. I could not believe what I was seeing. Usually our camo is good enough to keep us hidden from unsuspecting game, but when a deer is alert, there isn’t much than can fool their eyes. As I nocked a new arrow and drew back, I took more time, and settled my pin. Even after watching the doe expire about 60 yards away, I was still in disbelief that she did not pick me off. Say I just got lucky if you wish, but I can only weigh the facts together, and for me the only reasonable explanation was the HECS suit.

Since that day, I can count on one hand the amount of times a deer has busted me (non-scent related), and not once has a visual sighting been enough to send a deer running. It amazes me each and every time my HECS Suit saves my tail, but I have long since quit questioning it’s ability to perform.  Now, I even make sure I have my HECS Suit on for simple tasks such as checking my trail cameras.  Today, hunting pressure in many areas is greater than it has even been, it’s hard enough to locate a mature deer, it’s harder still to get a shot opportunity. Don’t leave your next hunt to chance, get your HECS Suit today to find out how it can help you become more successful.

I was able to do something I’ve always wanted to do as the 2020 ATA Show wound to down on Saturday;  A bow shoot off.

The D’Acquisto 2.0 hang-on is the next evolution in the D’Acquisto series of hang-on tree stands by Lone Wolf Custom Gear (LWCG). This stand is

The Firenock booth was once again buzzing with excitement at the 2020 ATA Show. So busy in fact that it was the last day of